In two weeks, I’ll be hitting the John Muir Trail, a well-known nature walk, named for California’s best-known naturalist. It’s a long trail, anywhere from 211 to 224 miles long depending on the source and how you count, that winds its way through California’s Sierra Nevada mountains.

I was supposed to undertake this adventure with a friend of mine, but he had to cancel because of work. When he let me know, I was left with two choices: call it off or continue as planned.

My FILDI in this matter is mighty, so I’m forging ahead.

How Long Will it Take?

First estimates had me finishing in 12 days. Ambitious, I know, but some people have done it in seven. Seven might be a tad fast for me, but I do like to keep moving along at a steady pace. But due to circumstances beyond my control (of which I suspect there will be a least a few more coming my way), I’ve got a revised estimate of 14 days. That’s roughly 16 miles a day (more if I can swing it), but mileage will vary between 12 and 20 depending on the terrain I’m crossing—shown here this John Muir Trail elevation chart (courtesy of Loc Nguyen via Flickr, CC BY-ND 2.0): 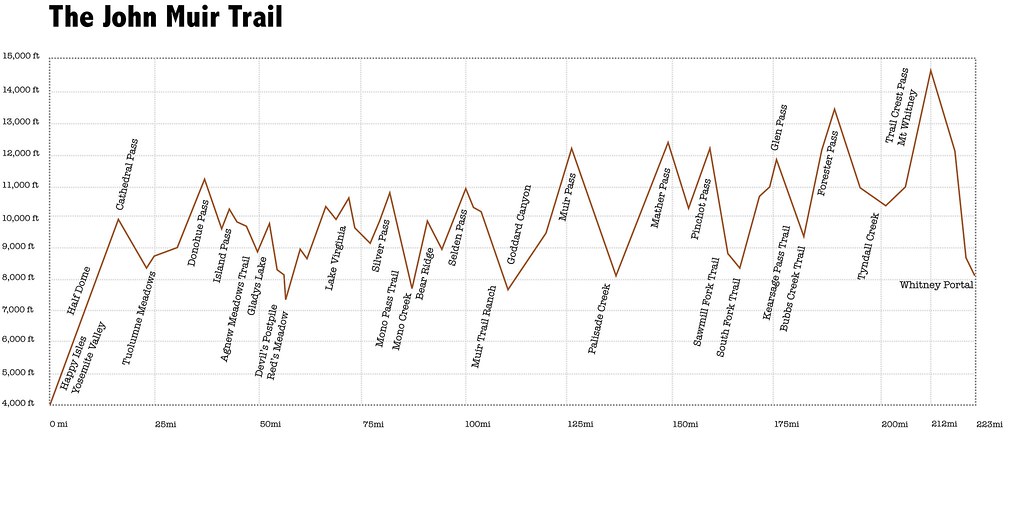 Right now, I’m about 80 percent certain the trip will start as planned, but only about 50 percent sure that I will finish the entire trail as planned due to a few unknowns (in order):

I’ve practiced hiking the last few months in the Angeles National Forest, testing both my fitness (which I’ll rate as pretty good) and much of the gear that I’ll be using.

I’ll be writing about some of that gear and my final preparations here in the coming weeks. I hope it’s at least a little entertaining and perhaps slightly educational.

*My daughter was quick to point out that you can live for three weeks without food, so I should be okay. As long as I have water. You can only live three days without water—so she tells me.

Being a fella who likes to cook in the out of doors, I was intrigued by the BioLite CampStove. So I ordered one and gave it a try. Here’s what happened.

I’ve never really been an umbrella guy, but the Liteflex Trek Umbrella from Swing Trek changed my mind.

Save money — and your electronics — with The Incredible Spill Not.

Join me as I open up the Nomadik November 2016 subscription box and take a critical look at what’s inside.

When it comes to keeping biting insects at bay, nothing works quite as well as a liberal dose of Ultrathon Insect Repellent.

A great adventure deserves a great hat, and my hat of choice for this particular adventure is the Honey Creek Safari Fedora from Goorin Bros.