I’d never hiked for 13 days straight before, so I had no idea what to do for food. I just knew I’d need a lot — and I’d have to cram it all into a space of just 10 liters (614 cu. in). Andrew Skurka’s The Ultimate Hiker’s Gear Guide: Tools and Techniques to Hit the Trail really helped me dial in my food plan. 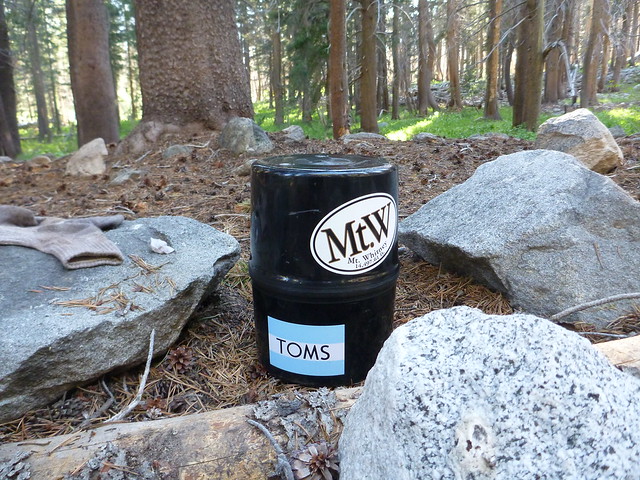 I crammed six days of food into this thing. It wasn’t easy.

In selecting foods, I found this trend of single-serving packaged foods to be quite beneficial. But the problem is, most of these are geared toward a convenience diet and emphasize a low-fat, low-calorie lifestyle (which is a good thing, normally). But I needed high-fat (for sustained energy), high-caloric foods for this adventure.

Counting calories is a dark, mysterious art to begin with, and I knew I’d be burning a massive amount daily. I was doubtful I could keep ahead of just how many calories I would be burning, so I looked for foods with dense caloric value, even knowing that calorie labels aren’t always the most accurate.

With that in mind, my plan was to try to eat a few big meals during the day, supplemented by a 300-calorie snack every hour. So with that set, up, here is …

What I Ate On the John Muir Trail

What’s not to love here? In regular life these are an acceptable alternative to a good cup of coffee. On the trail, though, they’re essential. I carried 14 during the trip, and they took up very little room in the bear canister. Highly recommended if you’re a coffee drinker. No calories, but massive satisfaction.

Rich with flax for the extra good fats. I’m not much of an oatmeal guy, but I do like how these taste. In the final days, I did have to choke it down, though.

I was thrilled when I found tuna in single-serving pouches, but the water and mayonnaise versions just didn’t have enough calories (between 80 and 100 calories per serving), so I opted for the sunflower oil. After a little research, I learned about the Yellowfin Tuna in Virgin Olive Oil, which has 190 calories per serving. That’s like gold! But I couldn’t find this variety in any store, but next time, I’ll definitely be carrying some.

The tuna in sunflower oil was pretty tasty, but it gave me heartburn. I’ve never had heartburn in my life until I ate these, and I didn’t know what it was at first.

I mean, peanut butter. Next to eggs, peanut butter is pretty much the perfect food. I didn’t carry enough of these. On the last few days, I mixed it with oatmeal, a recipe I regret not discovering sooner. 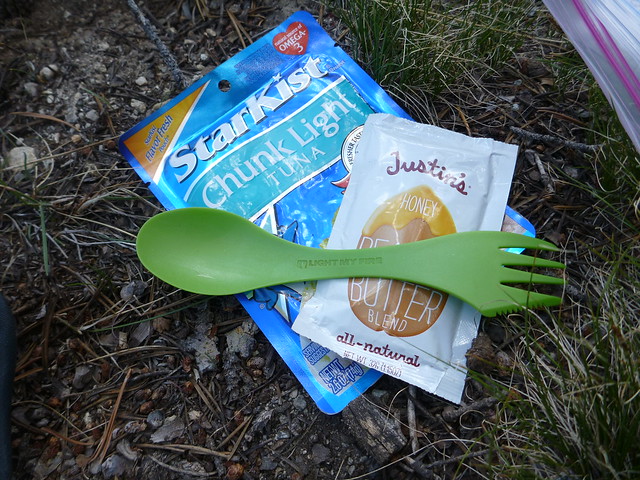 When I was a kid, I used to eat (drink?) these all the time when we went camping. So these came with the nostalgia factor. And although they weren’t as heavy on the calories as I would have liked each serving has a significant amount of sodium (540mg) which is an essential electrolyte that needs to be replenished.

These have long been a staple of my hiking experience. Usually tasty, rich in calories and all the stuff — like fat, sodium, and carbohydrates — needed to keep a hiker going. And preparation is quick and easy.  The only problem is the packages, while convenient to cook in, take up a lot of space in the bear canister. So I re-packed all mine in sturdy Ziploc sandwich bags.

I avoided all the cheese-based meals, like Lasagna and Macaroni & Cheese (which was unfortunate, as I enjoy those quite a bit). The problem with these meals is that when re-hydrated, the cheese turns into a glue-like goo that sticks to everything. I typically eat these right out of the bag, so all I have to clean is the spoon, but since I was re-packing, I’d be cooking right in the canister of the JetBoil camp stove. I didn’t want to be cleaning that cheesy gunk out of the stove each night, so I opted for other, non-cheesy meals like Beef Stroganoff with Noodles (surprisingly good), Spaghetti with Meat Sauce, Rice & Chicken, and Noodles & Chicken.

Salted, of course. I hand-packed these in a 50/50 split into snack-sized Ziploc bags. I was shooting for 300 calories per bag (by weight), but some were larger than others. I ate this four times a day. Sometimes this snack proved to be a little dry and I had to choke it down with extra water.

I searched high and low for the perfect trail mix. I ate a lot of different varieties, and after this extensive testing, found Trader Joe’s Rainbow’s End to be something I could shovel into my mouth over and over again and still look forward to the next handful.

It’s full of candy-covered chocolate drops, almonds, dry-roasted peanuts, raisins, etc. Just a solid trail mix with a good amount of calories per serving. They were listed as having 150 cal per quarter cup, so I re-packed 1/2 cup per snack-size Ziploc bag, so 300 calories and ate a bag four times a day.

I re-packed these in snack-size Ziploc bags of 12 pieces each, which worked out to two servings. I’d have one as a mid-morning snack, one as a mid-afternoon snack, and a third one as dessert after dinner.

At VVR I bought like 10 of these packs. Their sweet vs. salty profile is perfect for me. I ate one to two of these per day for days seven through 13.

I’ve written about my love of Fritos on the trail, so you know that ounce-for-ounce, a bag of Fritos has more caloric power than pretty much anything else you can cram into your bear canister (160 calories for a mere 10 chips!). I lived off of a bag for my seventh day.

I brought a few of these along for extra oomph on days I needed it. I didn’t really start using them until the 10th day, but I’m glad I had them. They were always good for a quick dose of energy and really helped me get over some of the higher passes. My flavors of choice were Blueberry Pomegranate and Cherry Lime. 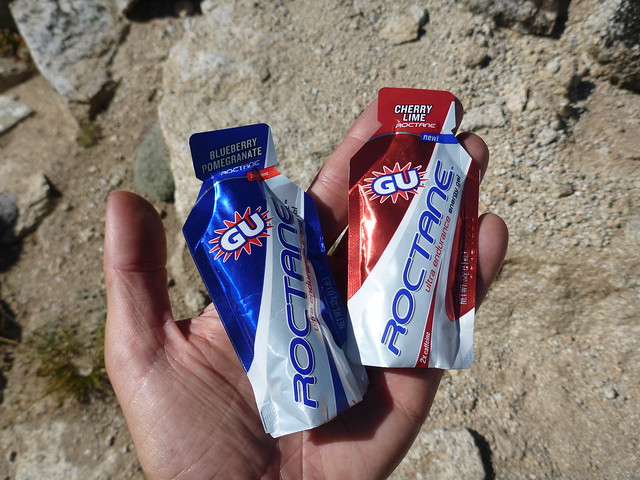 Starting out, I tried to keep one of my water bottles filled with water and the other with drink mix, but when I got hot, I really preferred plain old water. Instead, I’d mix one of these up in the evening as I knew I was nearing camp and drank it during camp set-up and dinner.

While this is not my normal endurance drink of choice, I thought it would add a little variety to my food. It’s weird, because serving size is 2/5 of a packet, but there are 2.5 servings per stick (and weird that they call a packet a “stick,” but whatever). At 20 calories per serving, each “stick” was 100 calories). I used the full stick and got 100 calories per pack out of it. I didn’t use it that often, for the same reasons outlined above; I preferred plain water.

Adding It All Up

On a good day, I took in about 4,560 calories. But some days, especially early on, I skipped a few of the snack times because I just wasn’t hungry. And later on, I had “food fatigue” where I was bored of my choices.

It’s worth noting that the 24 hours I spent at Vermilion Valley Resort, I must have taken in 15,000 calories (at least) while expending nearly none.

What It All Weighed

The bear canister weighs 2 pounds 12 ounces empty. It weighed between 12 and 13 when full. Almost half my pack weight was food.

According to my Nike Fuel Band, I burned nearly 40,000 Calories (39,344 reported) on top of my basal metabolic rate of approximately 1,600 per day (calculate your basal metabolic rate). Add that up and I average a caloric burn of more than 4,600 daily. Not bad. 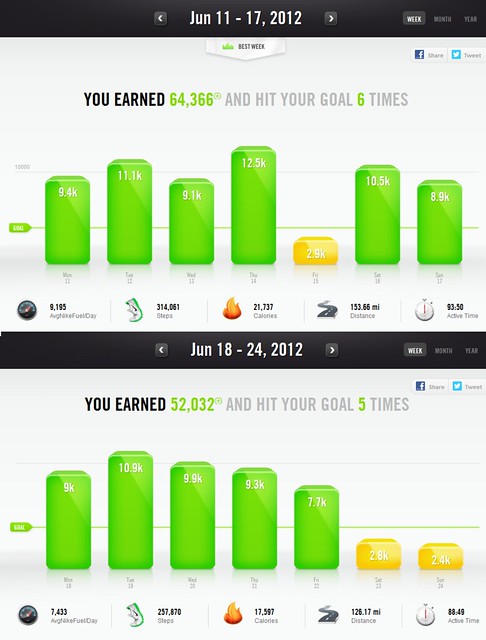 The calories burned above don’t include the daily resting metabolic rate, which is the amount of calories you normally burn by just existing and not doing anything else. For me, this is about 1,600 daily.

When I Do This Again

By comparison, at the Outdoor Research blog, Jaegar Shaw writes about jamming 32,560 calories, what he thinks he’s going to eat in seven days, into a bear canister. I could only get about 27,360 in mine — and it was stuffed! And that was only six days of food. So his feat is mighty impressive.